The following June 2nd, only a few years after divorce, Keith and Rachel got married again in a quaint ceremony in the privacy of their own home. Other than a rekindled love for each other, deeper than when they first wedded in their twenties, they went back to the lives they led quite similarly before they divorced.

Keith stayed home with the kids and for his congregation, while Rachel traveled on the road making connections, appearing on TV Shows, and attending Award Ceremonies as an announcer. She even had a cameo in a huge, Hollywood production. She made the cover of emagazines. A few editors at warring publishing houses came to her pleading with her to write an autobiography.

However, the studio was the place she was most likely to be found.

Though she loved to be in a creative space, collaborating with her bandmates… her fellow band members weren’t feeling the same happy vibes.

Sophie Tremblay spoke up after listening to what Rachel was set on being the title track to their new album: SOMETHING REAL. “So it’s another song talking about God and referencing your family?”

Picking up on the tension in Sophie’s voice, Rachel knew it was more important to let Sophie air her feelings. “Yes. Could you elaborate more on how you feel about that for me, please?”

“Everything we do is for you and about you. It’s like you’re a solo act and we’re the accompaniment.” Sophie snapped. “We play what you write. We tour when you want. We go to events you approve.”

“I’m hearing everything but directly what you feel…” Rachel crossed her arms and defensively stood tall facing Sophie, who was pacing across the room by the blue couch, opposite of Fitz’s sound-mixing gear.

Fitz’s new recording studio was white, sliver, and shades of blue… his wife decorated everything from Fitz’s three favorite colors.

“I’m pissed the [bleep]ing off Rachel! We used to write music together. In the beginning, you said we would all be able to write, and to sing, and we would purposely be producing a myriad of melodies and sounds because it would exemplify our band name and we would be the depiction of complicated souls intricately connected in a complex world!” Sophie hollered.

Justine nodded her head and said, “I agree.”

“I do remember you saying something like that when you and Skeet pitched the idea of forming a band,” Fitz added.

Sighing, Rachel took a seat on the exercise ball beside Fitz and his audio mixing station. All she wanted to do was lean back in her chair and brood for a second, but instead, she bounced gently, up and down, praying in her mind asking from above for help to stay calm.

“Okay, Sophie… let’s hear what you got… Justine, if you have anything… we need to hear it too, but I will add this… This song we just heard will be on the new album.”

“I left my journal in the car, I’ll be right back,” Sophie said, in a calm, serious tone as if she didn’t explode with anger 20 seconds ago, and Rachel was the bi-polar one?

“I don’t have anything right now…” Justine admitted, “but I will next session…”

“Wow,” Fitz huffed scratching the back of his head.

“What?” Rachel was curious what was on his mind.

Rachel just blushed.  She knew where he was coming from because before taking Jesus back into her heart, she would have had a huge fight with Sophie and probably would have replaced her the next day. But tonight, Sophie reminded Rachel what the band was originally supposed to be about and chasing fame made Rachel lose sight of that… it was time to see the fulfillment of Byzantine Souls come to life.

Mary poured Rachel a cup of tea from her seat. They both sat at the kitchen table, that consumed all the free space left in the kitchen. A wall of cabinets bordered them in behind Rachel, and the wall oven and the stove adjacent to the sink and the fridge behind Mary, cubed them on the other side. Only the door to the laundry room and an archway to the foyer led to a safe escape.

It’s been nearly a decade since Rachel saw her mother in the flesh. The woman still never left the house. She missed Santi’s and Serafina’s births because of her irrational fear to leave her house, paired with unexplainable neck pain that flared up the moment she stepped outside.

Today, was Storm’s birthday and he was in town visiting with Uncle Danny, Aunt Evie, and Cousin Weston. Rachel originally came to town to unexpectedly drop by on Storm, but she figured Jesus would want her to see her mother too… Those who honor their mother and father have a long, prosperous life… It was amazing that Rachel’s life was so charmed based on how poorly she treated her mother.

Fretfully, not wanting to burn her tongue, Rachel slurped a quick sip of her the herbal mint tea her mother had served her. Luckily, her tongue avoided burning and her throat got soothed by the warmth of the tea.

“Would you like honey or sugar for your tea?” Mary asked.

Rachel felt like she was talking to a distant relative, not her mother… Distant relatives were more awkward to talk to than to strangers.

“I love that song you put out with Keith’s church… God Is Real… I was relieved to know my prayers for you were answered.” Mary smiled with soft tears in her eyes.

That comment shattered the invisible barricade between them and made Rachel lean forward off her seat, reach across the table, and embrace her mother. The two women cried together with tears of joy, mixed with a little bit of grief over lost mother-and-daughter-time, but mainly they wept together grateful for what the LORD had done winning Rachel’s heart back for good.

Rachel looked her mother in the eyes, wiping the elderly woman’s face dry with her hands. The brightest blue eyes stared back at Rachel. She always wished she had blue eyes like her mother. When she was younger, Rachel wore blue contacts all the time. She tricked a few people into believing she had such mutated irises.

“Come live with me and Keith. Let us take care of you. You don’t have to fly, we could road trip there. I’ll get a bus so it won’t be all cramped up.”

Disappointed, Rachel stood up and turned her back to her mother.

“You’re brother and Evie are here, plus, Weston is going to college here and I need to be here for him…” Mary had valid points.

Perhaps it was selfish of Rachel to ask for so much.

The door bell rang, since Rachel was up, she got the door.

“You didn’t say your mom was going to be here!” The young lady said excited. She had blonde hair and blue eyes… totally not the type Rachel pictured Storm with, well, she never pictured him with any type… but apparently boys choose women like their moms, and Everly must still be his mom deep down in his heart.

The very pregnant woman squeezed by Storm and barged into the foyer. She grappled Rachel into a hug. The woman was an excellent hugger and her presence was warm and cheery. Without holding a conversation with the woman, Rachel felt she knew the woman for ages.

“I’m Cleo,” she shared her name and then she pressed cheek to cheek with Rachel, once on each side as if she kissed each cheekbone. That was a European greeting. “It’s SO great to finally meet you!”

Mary stepped into the foyer and excitedly welcomed Cleo. The women locked their hands together and spun in a circle screaming with glee at the sight of each other. They both go to kiss each other on the cheeks, mirroring what the other does. Then when they do hug, the twirling continues, making the long, yellow and blue floral flowing dress Cleo had on flare out like a spinning top. The skirt of the dress flogged Rachel in her blue-jeaned legs. Once the spiraling halted, the two stood side-by-side holding each other under one arm in a side hug. Resting the tops of their heads together, Mary stated, “Cleo may be my granddaughter-in-law, but she is like the second daughter I never had.”

Feeling sucker-punched in the heart, for numerous reasons, Rachel rushed to the kitchen to grab her purse and to grab her keys. If she didn’t leave, her mood was going to shift and she didn’t want to have a breakdown in front of the daughter-in-law she NEVER met.

“Are you leaving?” Mary wondered following after Rachel.

“But we just got here?” Cleo was confused. “Oh… you didn’t know we were coming…” She hung her head.

“Mom,” Storm called out, brushing past Grandma Mary, and stepping in front of Rachel so she couldn’t leave.

Rachel was a bit freaked out at how much he looked like Skeeter now that he was 26. His beard wasn’t outrageously down to his chest, but it was thick. He wore Clark Kent glasses and his arms were sleeved with tattoos. A teal, one-inch gage in each ear. His wavy black hair went down to his shoulders with a greasy, slicked back look. He wore a gray tee shirt and tight, black jeans, and timberlands. He smelled like sandal wood. This wasn’t the Storm that left home for college eight years ago. He didn’t even seem like a business man working at a fortune 500 company.

“Surprise,” he snickered as he held his arms up offering to wrap Rachel in for a long over due hug.

Next Month to the Day

The Path of Life

Byzantine Souls cleaned up at the Music Grand Academy Awards. Best Song, Best Group or Duo, Best Engineered Album, Best Album of the Year, Sophie won Best New Artist of the Year and Rachel won for Best Artist of the Year. (Rachel, Sophie, and Justine were featured as individual artists on a few songs on the last album, which made them eligible to win awards independently.)

Though she had lived her dream out to the fullest, nothing made her happier than knowing God, serving at church, helping those in needs, and giving back to the communities that changed her life. She was immensely grateful for her family and her friends.

She lived to be over half a century and she never thought she would live past the age of 25. God blessed her with an amazing life and she knew she had so much more life to live, and for the first time in her life, music wasn’t the biggest priority anymore… family was… first expanding God’s family for the kingdom, and then her very own family, second, but anything Rachel personally wanted… could wait… 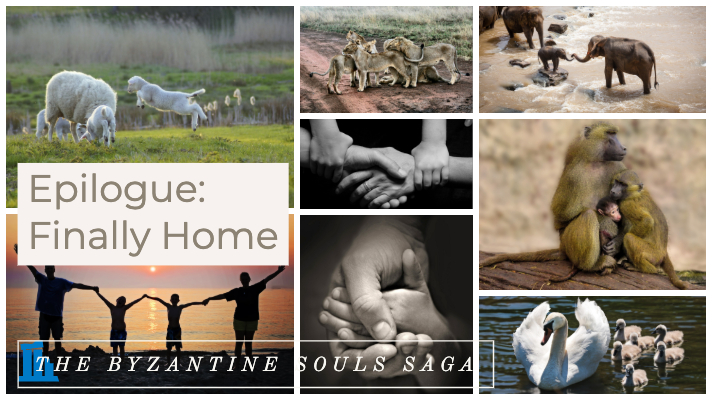